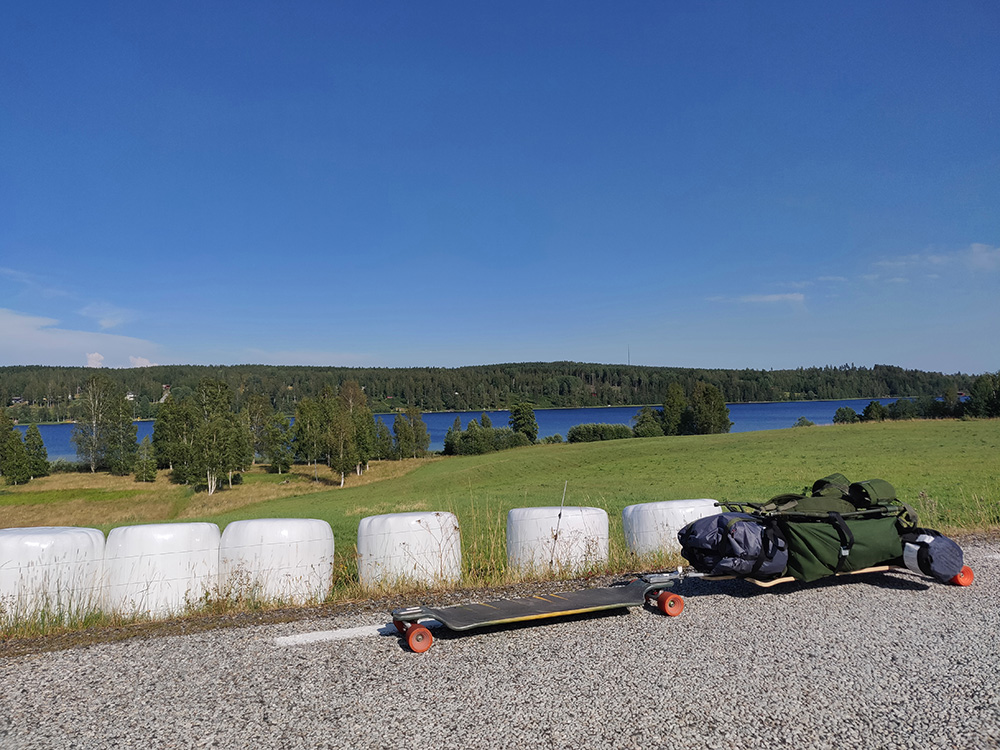 This is a small bonus post for you really eager long distance riders.

Recently I tried putting all my pack on a separate board that I pulled behind me using a Longboard Larry hitch. I was able to buy it from the awesome Anders Karlsson who used it to help him ride across Australia.

With the hitch I also got a back truck from him as well. It’s quite a bit wider than a normal truck and normally used on mountainboards. Having it that wide helps keep it a bit more stable. I already had an extra set of classic Orangatang In Heats so I used two of those.

I have to say right off the bat, it was amazing to not have any real weight on my shoulders while riding. I’m used to 10-12kg on my shoulders and I’ve had issues with backpain after a full day’s riding so this was a great solution in that aspect.

But, not everything was nice and rosy. Instead every push required more force to pull the whole weight forward. So even though I was able to push more often as bending down isn’t as straining as before, the weight of the packboard made each push weaker and forcing me to push pretty much continously.

And in the end I’d guess it takes just as much energy as when using a backpack and probably takes about the same amount of time. And I believe uphill was probably even harder than just having the weight on your back.

Another negative is that having the board tip is a new problem. It didn’t take much of a carving turn for me to have the board flip on its side. Because once it flips, it can quickly ruin gear. For me it cut through my dry-bag and almost damaged my sleeping mat.

So I had to go very slowly down any hill I was uncertain of handling. Lowering the center of gravity on the pack board would help but that’s made trickier because I want to be able to carry it as a backpack. Sometimes you just have to walk stretches of road for various reasons so I wanted to make it easy to pickup and carry when needed.

I’m going to have to think over it a bit more, do I want to have an easier time for my back or do I want to carve and be able to go downhill faster? We’ll see.

PREVIOUSAnd all the other gear
NEXTRedesigned and reimagined
Search